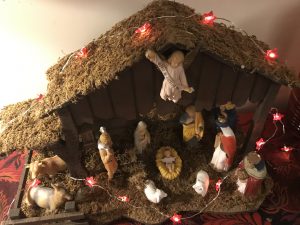 One of the few Christmas decorations I pull out each year is a Christmas manger scene that my mother gave me. Over the decades, Mom would ask me if I had set it up yet, so partly from guilt I would get it out, so that I could say yes. But the truth is, it has brought me a lot of joy to see the little baby Jesus in his crib, surrounded by animals, loving parents, and travelers, and protected by an angel. The human figures no longer stand firmly on their own without toppling over a few times.  It isn’t a finely carved presepio that Italy is known for. The figures and manger are molded plastic, yet they are still tasteful.

One year, the year that was to be my mom’s last, when the Epiphany arrived on January 6th, I resisted taking the nativity set down. Mom was not doing well and having this Holy Child nearby felt like a source of grace and comfort. Mom left hers up as well, and we joked on the phone that this was the longest time that we had ever had them on display into the new year.

After Mom had departed this earthly realm that March, I stayed in her home to help with the task of sorting and dividing her things. Those items that had a more personal attachment, that hadn’t yet gone to those in need, the thrift store or to us children, were arranged in piles throughout the house. My sister and I tried to think of who among her many grandchildren, nieces, and nephews might need or want the things of her life. For some reason, Mom had two nativity sets. We gave away the one that had been on display to a granddaughter and the remaining one was in a box in the garage.

One night, before going to sleep, I decided to take another look at the creche, slated for the giveaway pile. I thought perhaps I’d want to trade mine at home for this one. This time, however, I pulled it all the way out of the box, and when I did, I found a long white envelope tucked inside the stable. It was stuffed with money – $900 in twenty-dollar bills! Well this was quite a stash. It was as if those Wise Men had brought cash, rather than gifts, and in small usable bills!

After some pondering, I decided that this money must have been Christmas gifts for the great grandchildren, grandchildren, and children. At age 90, Mom had reached an age where shopping for individual gifts was no longer a pleasure, and money was an easier remembrance. She must have tucked this envelope away one year and never distributed it.  My sister, Marlene, and I added it to the pitcher in the china cabinet that held all the money we had found around the house for later distribution.

Spiritual currency – grace, good works, prayer – was certainly more important to Mom than monetary currency. This cash, though, was a gift, blessed with love and remembrance. Finding the money in the nativity scene that night felt like a delight, a Divine Mystery, a connection with my mother amidst a long and difficult task.

“This is where the treasure is, the abundance, the promise,” it seemed to say. “Right here, in the wonder of birth and annual rebirth among us.”

4 thoughts on “The Grace and Wonder of the Christmas Creche”