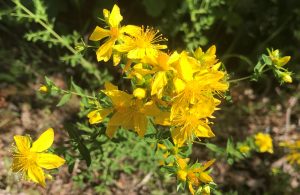 Walking down the road along the edge of a forested ravine last week, I was delighted to see the golden flowers of wild St. John’s Wort, an old friend and a plant ally. It blossoms in the fullness of summer, near the summer Solstice and the feast of St. John the Baptist on June 24th. I still remember finding it for the first time on the Island where I live, after two summers of seeking it. I had a dream about it the night before and carried that intention with me as I walked. Discovering the location of medicinal plants seems to require a kind of deep listening and a call from the heart.

Erin Kenny, a local naturalist from whom I learned about wild plants, prefers the name St. Joan’s Wort, named for Joan of Arc who may have carried it into battle to be used on wounds in its salve form. From Erin I learned to make a tincture in alcohol using the flowers, leaves and stems, which she cites as effective for nervous conditions and nerve pain.

My Ancestors in the Italian Alps likely knew and used this plant. They were adept at what Trentino journalist Alberto Folgheraiter calls “pharmaceutical self-sufficiency.” They knew–and some still know—which plants offer healing medicine when prepared in the appropriate way at the right time of year.

In the past centuries, St. John’s Wort was used as an “extraordinary remedy for innumerable ills,” according to Emanuela Borio. Described as a cure-all, its leaves appear perforated when viewed against the light, giving Hypericum perforatum (its Latin name) one of its nicknames in Trentino dialect, perferata. When its golden flowers are conserved in oil, it turns red, perhaps the reason for its name “erba del sangue,” herb of blood. Ferrante Cappelletti describes the highly efficacious oil, properly prepared, as miracolosa (miraculous) for every type of skin wound, including sunburns, burns, and sores. When the flowers are added to grappa, the local distilled spirits of Trentino, it helps digestion, stomach acid, nausea, and vomiting.

In Trentino dialect, it was known as erba de san Zoan (herb of St. John) and erba da strie (herb of witches). It was also called Fuga Daemoniorum, demon chaser, because it was believed that it would drive away demons, witches, and the spirits of darkness, evoking its modern-day internal use as an anti-depressant.

Drinking tea from the fresh plant transports me to the shores of magical Lago Moro in Val Camonica, Lombardy, in northern Italy where I first brewed it, thanks to my friend and resident guide Franco Gaudiano, who spotted it during one of our hikes. Wild plants connect us with place in a meaningful way. A natural outcome of gathering wild plants is the desire to protect the places they grow.

This connection of plant and place is conveyed beautifully in Braiding Sweetgrass, a book that I highly recommend. Robin Wall Kimmerer blends her Indigenous worldview and scientific training into poetic, compelling essays. One can’t help but fall in love with plants and be grateful for their gifts.

Don’t cut me, don’t burn me, if you want to be healed from every illness.

Cappelletti, Ferrante. 1966. Atlante Dalle Erbe la Salute, Piante Medicinali dell’Arco Alpino. (Atlas of herbs for health, medicinal plants of the Alpine Arch), Trento, It.: Casa Editrice Publilux. The contents include the names of plants in Trentino dialect and a copy of a handwritten letter dated 1966 of Mario de Gerloni, botanist, chemist, and pharmacist of the Antica Farmacia Gerloni in Trento who advises that many of these medicinal herbs, which he has used in his seventy-five-year practice as a pharmacist in Trento, grow in the wild on nearby Mt. Bondone.

Folgheraiter, Alberto. 2009. Beyond the Threshold of Time. Translated by Fr. Marco Bagnarol. Trentino, It.: Circu and Genovese. The chapter, “Illness and Popular Cures,” lists numerous folk medicinal cures, including the use of wild plants as well as other biological substances.