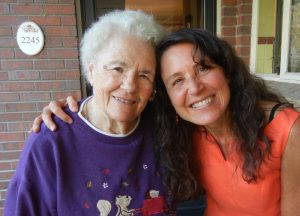 New Moon, March 4, 2011   As I write this introduction, I have just returned from a period of caring for and being with my mother, who is recovering from a broken hip. When she fell, on January 3, 2011 and hit the floor of her dining room, the earth shook for me upon hearing the news. Learning of her progress with reports from my sister, Marlene, and then witnessing her daily improvements in person have inspired me during these tumbling times of change. Will I have her determination when I am 87 years old to meet such challenges? Do I have such courage now to rise up and learn to move in new ways in a changing world? Will we all be able to do the hard work of rebuilding broken structures that no longer sustain us?

My mother has repeatedly thanked me, “tante grazie, cara fiola,” endearingly using the Trentino dialect of her mother, however the rewards are also mine. In sharing ten uninterrupted days and nights with my mother in service to her well-being, my rhythm found its resonance with hers allowing me to be present in the moment. My body and spirit were fed by the daily dose of light seemingly ever-present in the blue skies of Colorado, my birthplace. I felt a familiarity there, conveyed in the essay I chose to submit for this anthology, which I was able to read to my mother in person. A solid feeling of family and motherline was amplified by the watchful gaze of the Blessed Mother images adorning several walls of her home.

During the day I hung out the laundry in the unseasonably warm February weather. In mid-afternoon, while my mother rested, I sat outside on her sundrenched back porch re-reading excerpts of the essays presented in this anthology and finding the threads of commonality.

In the evening, after the simple activities of the day, we sat in the living room where I would read my mother the letters that she had written to me decades before, letters that I had saved and brought along. Her weekly hand-written or typed letters of family news sustained me when I married and left my large clan to live in the Northwest. The pages were filled with the vitality of an earlier time, which seemed to infuse the present. Although we knew how the adventures turned out for my younger brothers and sister as they made their way through school and life, and for the other featured family members, we were reminded of everyday challenges and life’s spiral progress, held by the supportive net of clan.

As I unfolded one of the letters to read one night, a two-dollar bill fell into my lap sent by my mother as repayment for a photo I had given her. When I closed the letter to return it to its envelope, I discovered that the postmark was February 21, the same date as I was reading the letter again, 32 years later, in the presence of my mother. The auspicious two-dollar bill will go on my home altar, as I imagine its messages. Its denomination of two seems to speak of balance, which indigenous cultures on all continents seek to restore through communal healing rituals, and which nature bestows. Finding unspent money hidden away and forgotten over decades of maternal support, reminds me that the currency of mothering sustains more than materialism.

I realized that I am about the age my mother was when she was writing those letters to me, allowing me to view the wheel of life from the other side. The details — sometimes poignant, at other times hilariously funny, and always encouraging — remind me that it is the everyday stories that fill our lives: food, friends, fun; celebrations and hard work; the cycles of birth, life, and death. It is a gift to see the cycles unfold, to look back and remember that there is always change and growth.

My mother’s letters have unintentionally documented her long list of service to family, neighbors, and community. She has mothered, grandmothered, and great-grandmothered throughout her life. Her nurturing expands far beyond family. Reportedly she had more visitors in a day than most have in a week at the rehabilitation center that became her home for several weeks. She would never tally her friends by number. However she proudly enumerates her lineage: seven children, twenty-two grandchildren, twelve (soon to be thirteen) great grandchildren.

My mother has been there for people of all ages in service. She has cooked for them, prayed for them, visited them when they were infirm, watched over little ones, and listened to their sorrows and troubles. I dedicate this book to Lena, the She who is my mother. 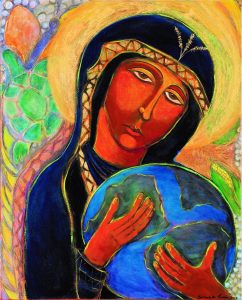 2 thoughts on “My Mother’s Letters: Everyday Stories Across Time”