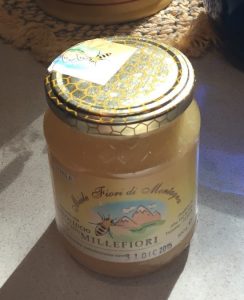 Honey appears in recipes for traditional food, beverages, and medicines. My preference, however, is a taste of honey all by itself, with no other competing flavors or textures. This intentional act of eating honey feels like a direct connection with the mountains of my grandparents’ homeland. I imagine I am taking in the wisdom of my ancestors, the healing of nature, and the essence of place. With a taste, I am in union with the exquisiteness of a thousand wildflowers in spring bloom.

The jar of Trentino honey joins other honey on my shelf each with its own sweetness of memories and place. One jar is from the mountains in Piedmont, in Northern Italy, near the Black Madonna Sanctuary of Oropa. Another small jar is from Campania in southern Italy, a gift from a friend who visited the Sybil’s cave in Cuma. From Crete, there is a large jar of mountain honey, the quintessential nectar of place. Of course, there is a quart jar of local reddish-gold honey, from a nearby island store where it is available on tap, and which runs faster on these warm summer days.

Each region of Italy offers its own honey, derived from the flowering plants of that place: miele di macchia from the dense coastal shrubs in Sardegna; fico d’India from prickly pear cactus in Sicily; and mandorlo from almond tree flowers in Puglia. Reading the list on the Honey Traveler web site evokes a living memory of experiences in each of these places.

Honey – wild, raw, and healing —has been considered a sacred substance across time and continents. Shops in Monte Sant’Angelo, Puglia, sell a confection known as ostia ripiena comprising two hosts or flat wafers of bread, with almonds and honey inside, a sort of holy communion with nature. Nearby is an ancient cave/church of St. Michael the Archangel, where a statue of the Madonna di Parto presides.

In the Mediterranean on the island of Crete, bees and bee priestesses appear on fine jewelry of antiquity. A gold signet ring, more than 3000 years old, found near Knossos portrays a Bee Goddess and women in sacred ritual to her; each has the head of a bee. An exquisite Minoan gold pendant from Malia is intricately shaped in the form of two bees carrying a golden drop of honey.

While on a pilgrimage in Crete with Carol Christ in 2015, some of us in the group heard the sound of wild bees near an immense tree on the Omalos Plateau. The din added to my already heightened senses as we walked through the rocky, mountain forest to the site of an ancient outdoor shrine. Later, during our lunch at the Aphrodite Tavern in the town of Kato Symi below, we were able to taste the honey that the local farmers had gathered. Pieces of honeycomb, like temple offerings, rested on either side of a small image of the Madonna displayed on the hexagonal mantle, a little altar of tribute and blessing.

It is remembered experiences that I take in with the taste of honey. My now-empty jar from Trentino reminds me that it is time to return to my ancestral homeland. 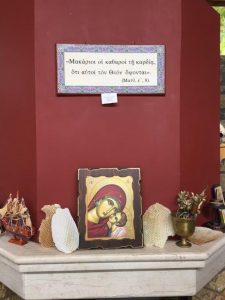 2 thoughts on “A Thousand Flowers”